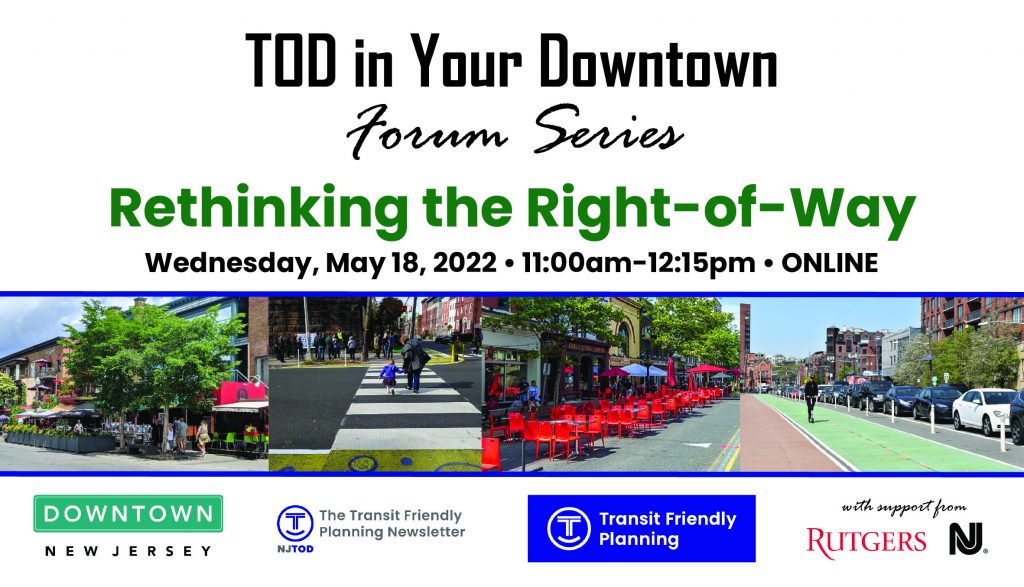 This article originally appeared on our event partner’s website NJTOD.org.

On May 18th, 2022, NJTOD.org, Downtown New Jersey (DNJ), and NJ TRANSIT’s Transit Friendly Planning Program gathered experts from the public and private sectors to share their experiences and thoughts on how municipalities, businesses, and, most importantly, the public can re-envision how their streets can be used for more than just moving people and products  and ultimately be more welcoming and productive. Presenting were Spencer K. Gober, Senior Planner at the Delaware Valley Regional Planning Commission (DVRPC), Dave Lustberg, Principal at Arterial LLC, Jay Muldoon, Director of Special Projects for the Borough of Metuchen, and Carolyn “Cally” Zebrowski, Treasurer for Cape May’s Washington Street Mall Management Company (click for bios). NJTOD.org’s Stephanie DiPetrillo and DNJ’s Courtenay Mercer introduced the session and Celeste Alsina, Facility Planner for the Transit Friendly Planning (TFP) program at NJ TRANSIT, provided background on the subject and moderated the panel.

Dave Lustberg brought his experience as a private planning consultant and landscape architect specializing in the design of streets and public spaces to the event. Lustberg offered that when reassessing and repurposing the right-of-way, it is necessary for municipalities to consider two objectives:

To answer the first objective, those involved in repurposing the right-of-way need to determine what kind of street they want to achieve. Should its main purpose be to 1) maximize the throughput of cars—a “car first” model, 2) provide the best mobility for all transportation—a “mobility first” model, or 3) become a place for people to gather—a “people first” model? Regardless of which model is chosen, compromise will be required as communities consider the tradeoffs between throughput, mobility, and placemaking in their rights-of-way. 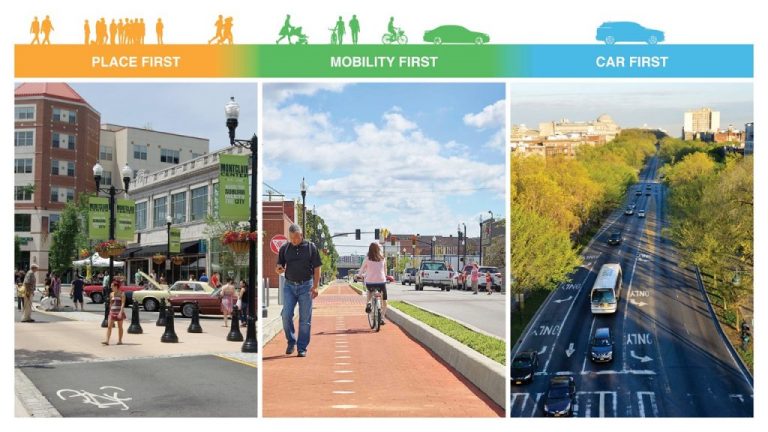 Regarding performance, Lustberg described three different considerations when redesigning a street, each of which plays a part in its eventual success.

First, designers must consider functionality to assure that the space maintains its purpose, i.e., does not lose characteristics that hold value for the local community. To this end, designers should consider whether the planned adaptations fit the place and whether proposed designs promote any existing art and culture that may be embedded in the location. Designers should also consider design improvements that support the environment and result in green benefits, such as integrated rain gardens, and support healthy communities, such as active transportation.

Functionality should also consider economic vitality; these spaces should enable business owners to continue to be economically successful and may even support increased economic success. A final performance consideration is the issue of quality—not in subjective terms—but rather describing designs created from high-quality and long-lasting materials. Lustberg shared that too often large scale projects fail in this regard and are implemented with fixtures that do not last; high quality design assures that the changes can be enjoyed for a long time. 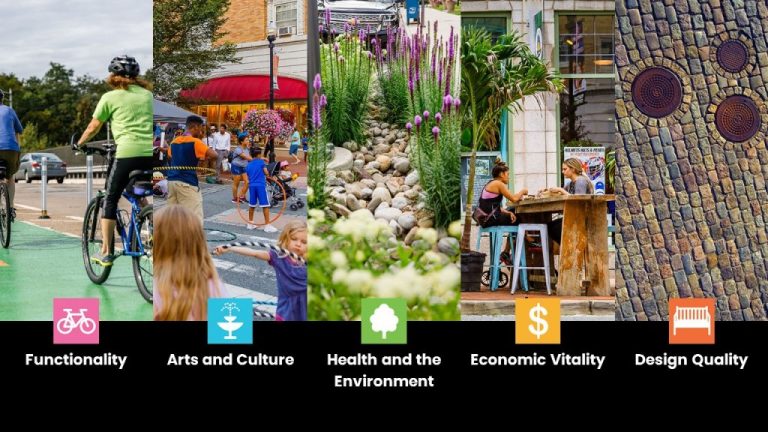 The discussion then turned to DVRPC’s Spencer Gober who talked about the use of data to measure the nature of retail business as well as economic activity in the region’s downtowns. In 2019, DVRPC, Philadelphia’s metropolitan planning organization (MPO) serving Burlington, Camden, Gloucester, and Mercer counties in New Jersey, began collecting data on the composition of downtown retail. This work resulted in the development of an economic diversity index, which measures the variation in retail establishments in specific locations.

Then, in 2020, DVRPC acquired de-identified cell phone data, which, in conjunction with the data they had previously collected, they used to identify patterns of shopping activity for 2018 through October 2020. These data indicated a pattern showing that places with more diverse retail uses felt less of an adverse economic impact from COVID-19.

The planners at DVRPC also observed that towns with a larger presence of, not just diverse retail, but denser housing and employment populations, fared better in the face of the pandemic. Gober offered that “if you have rateables like retail, you need people living near them for them to be successful.”

According to the data, local demographic diversity also played a role in whether a downtown remained commercially vital during the pandemic as those centers with greater demographic diversity felt less of an adverse impact. Moreover, downtowns with higher walkscores and lower vehicle ownership also saw significant stability.

Gober observed that due to the nature of COVID-19, retail establishments with an active digital presence experienced a smaller negative effect as social media and accessible online webpages allowed people to better utilize local shops and stores when social distancing was more prevalent.

Gober mentioned one caveat—while diversity did play a large role in reducing the effect of the pandemic on retail usage, downtowns with a larger share of food and beverage spaces (including alcohol production) experienced somewhat more of this resiliency effect. These were already third places for people, and the pandemic seems to have reinforced the desire for spaces that promote community and facilitate interaction.

Finally, Gober offered the observation that vacancies beget vacancies and that retail vacancies increased during the pandemic. DVRPC’s analysis supports making downtowns walkable, car light, and dense with both people and activities. These policies, as important as they are to economic success, are all the more significant to building resilience for times of trouble. 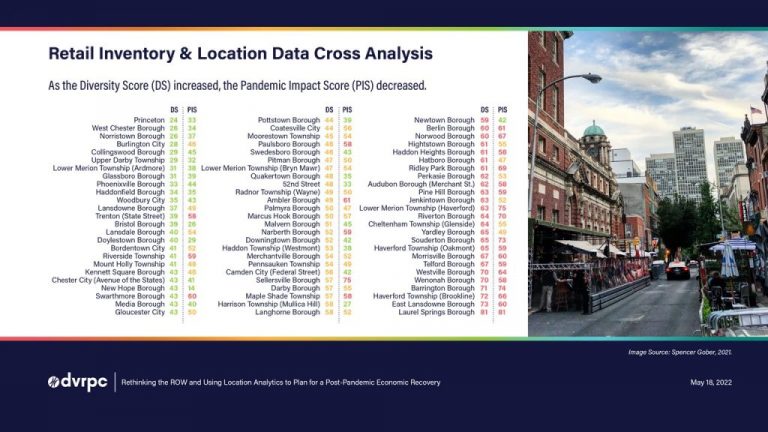 Refocusing attention from a regional to the local perspective, Jay Muldoon, Director of Special Projects for the Borough of Metuchen, discussed the municipality’s outdoor dining program. With the advent of the pandemic, Metuchen experimented with several different ways to utilize their public right-of-way in support of the program. Early on, the Borough closed all of New Street between Main and Pearl only on weekends, making the space available for gathering outdoors. Adapting to changing needs, the Borough shifted its street closure to one lane and expanded its duration to seven days a week. Additionally, Metuchen expanded the ability for businesses to have sidewalk dining and use local parking lots to support business activities.

Muldoon offered that the Borough was able to achieve its goals by working closely with the local special improvement district, Metuchen Downtown Alliance, and by engaging with local stakeholders as well as with businesses and organizations in the community to achieve a collective vision for the program. And as indicated by the changes made so far, the Borough is open to receiving constructive criticism and constantly working to improve the program. 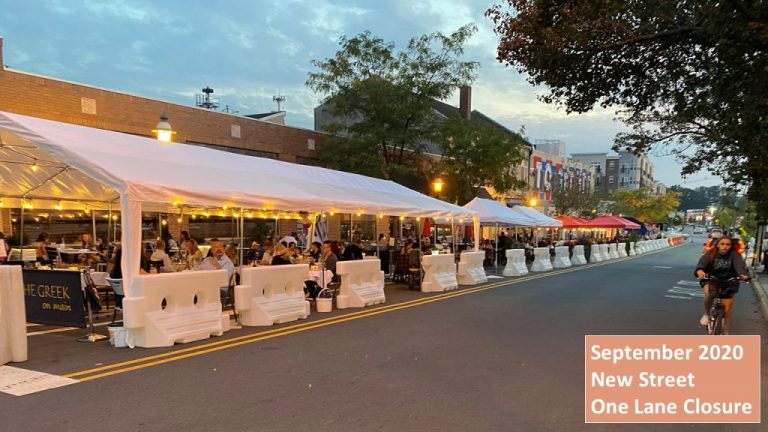 Courtesy of the Borough of Metuchen, 2020

The final presenter, Cally Zebrowski, discussed the Washington Street Mall in Cape May, where, in addition to serving as treasurer for the Washington Street Mall Management Company, she operates a business. The Washington Street Mall is one of the few surviving pedestrian malls from the 70s and 80s, a period when many downtowns were competing with both flight from the urban core and the rise of shopping malls. The mall is managed and maintained by the local businesses along its three-block pedestrianized space, creating an incentive for all the businesses along the walk to succeed. Washington Street Mall demonstrates proof of concept for ideas offered by the prior three panelists. Zebrowski talked about how strong public and private investment and engagement can be effective when utilizing public right-of-ways for uses other than private vehicles. This success comes, in part, from effective design that prioritizes pedestrians over other modes of travel, and from offering a diversity of retail uses. Together these characteristics have resulted in an economically resilient space that effectively serves the public. 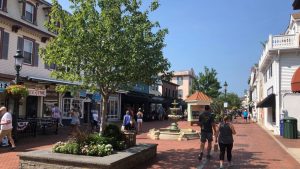 The moderated panel discussion touched on key steps to re-envisioning the right-of way as well as common challenges panelists had faced, such as accounting for parking and traffic issues. The panelists explained how data can be leveraged to overcome challenges and implement evidence-based changes. Ultimately, rethinking the right-of-way has the potential to improve quality of life, mobility, and economic opportunity. 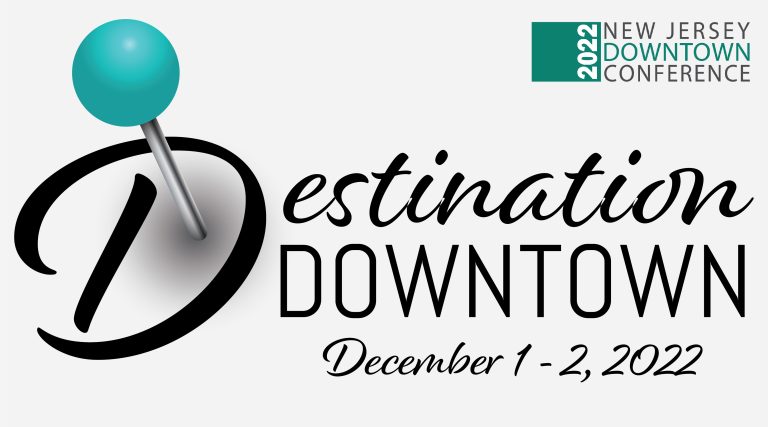