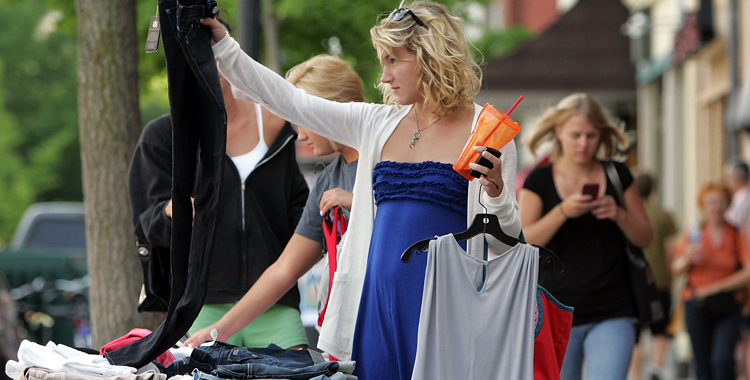 Downtown New Jersey has selected the following story as a Guest Post in an effort to share a variety of information with our members.

As a child I was very taken by Hans Christian Anderson’s tale about The Emperor’s New Clothes, especially the part where every adult seems to go along with the new clothes until a child simply states that the Emperor is nude. Often in working on downtown revitalization I am reminded of that tale: lots of what appear to be basic axioms or essential parts of conventional wisdom about downtown revitalization are too often partially or entirely wrong. They are to me emperors with no clothes. Below I call some of them out and briefly explain why they are “nude.”

Reality Check 1- This is a nice one. Thanks to the Great Recession, many recognized experts are now arguing that sprawl is ending. See, for example, John McIlwain at Brookings on the end of urban sprawl http://bit.ly/HA84Bq..

Let us rejoice that sprawl now has a stake in its heart! However, what are the policy implications? Are they really simple and apparent? I believe we definitely need to put our thinking caps on and properly think this through.

Reality Check 2 – Doing a retail leakage or gap analysis is appealing because comparing supply with demand sounds like such fundamentally good economic analysis. But, there are a number of data reliability and interpretive issues that cloud their validity (are they measuring what they say they are measuring?) and their value in program and policy development. First of all, collecting data on business firms and their revenues is a lot more difficult than one might think. The census is out of date by the time it is published. Business data from market research firms such as ESRI and Nielsen Claritas are based on data from InfoUSA, which does large national telephone canvasses of businesses and claims to be 95% accurate on the national level. However, on the local level we have found their data to often have far lower accuracy, and we now try to confirm the accuracy of their data before using them.

Another issue: the basic data on firms’ revenues and consumers’ expenditures are collected by two different federal agencies and, of course, they use two different sets of categories to organize the data. To be able to match the supply and demand data requires statistical manipulation and to my knowledge there has never been any published empirical test that demonstrates the accuracy of the data those manipulations produce.

Interpreting the leakages data also raises issues. For example, a surplus, where store sales are more than consumer expenditures, is usually seen as a situation where there is little prospect for future growth. But, according to niche theory, such a surplus may indicate a powerful retail niche that can expand its trade area. Another issue is that leakage is often seen as an indicator of growth potential, as the presence of “unmet local demand” that might somehow be more easily recaptured by a merchant who does not have to be all that capable. If the merchant is very capable, then he or she could fight for market share and then the whole leakage issue would be irrelevant. From policy, program and business recruitment perspectives, a business operator who will fight for and win market share is far more preferable than an operator who is looking for a situation where there is putative weak competition. Of course, the leakage analysis, does not get into the causes of the leakage, which often is that the competition is so strong that recapturing leaked sales is extremely difficult.

Despite these issues, we continue to do leakage analyses, but with very great care and considerable caution. We’ve found that doing a leakage analysis for a supermarket, restaurant or a women’s apparel shop, where we can gain a firm grasp on the business data gives us greater confidence than doing an analysis for all the downtown’s retail businesses. We also will use them when our prior research experience has given us an in depth knowledge about the local businesses or when the study area is small enough that we can readily confirm the accuracy of the firm-level data.

Reality Check 3 – Too many downtowns have followed this strategy and only succeeded in creating “decorated coffins.” Yes, these downtowns are more attractive, but after much effort and expense they are still deader than a doornail, with low customer traffic, little vibrancy and few, if any, strong new shops. Such physical improvements can be effective, but this is much more likely to happen when they are part of a comprehensive revitalization program that includes successful business recruitment, marketing, redevelopment and place-making elements.

The attractions of these programs are that they mostly require money, not innovative “rocket scientists”, can be done in a fairly predictable time frame, and provide visible proof of an organization’s ability to get things done. These should not be confused with economic impacts.

Reality Check 4 – This is a basic axiom of many downtown revitalization strategies and the cornerstone on which our understanding of “location, location, location” rests. Yet, there is pitiful research on it. Behind this axiom are three suppositions. The first is that there are a lot of pedestrians, though no metric has been presented that signifies when “a lot” has been attained. Second is that among the multitude of pedestrians many will be browsing and window shopping and incidentally discovering reasons to enter shops and make purchases. Finally, is the assumption that the more pedestrians passing by, the greater the likelihood that a store’s destination shoppers will pass through its doors.

My experience suggests that the impact of pedestrian traffic is most likely to be felt in large downtowns where pedestrian flows of thousands of people/hour are easily found, and 100,000+/day are sometimes reached. But, even here, because of e-commerce, surgical shoppers have emerged who are more focused, going to fewer shops and doing far less browsing and window shopping. The Internet also is guiding more shoppers directly to downtown destinations identified in their searches. Additionally, the Internet has changed a lot of these destinations into showrooms for shoppers who see and evaluate the merchandise first-hand, but then buy online.

Smaller downtowns – defined at some unknown cutoff point – with total daily pedestrian flows only in the 100s or perhaps even a few thousand, have never really benefited much from the browsing and window shopping customer. These downtowns frequently just do not have that many retailers that pedestrians are motivated to do much browsing. Moreover, the retailers in these towns usually do not often refresh their selections or windows, so the browsing is even less rewarding. Unless in a tourist area, the merchants in these smaller downtowns have been made or broken by their ability to be a destination for task-oriented shoppers. Strong destinations survived and weak ones disappeared – except when the weak ones endured, because there was no competition nearby.

I know of neither a simple metric nor a complicated formula that indicates how many pedestrians/shoppers are needed to support X square feet of a particular type of retail store.

Reality Check 5 – Back in 2005, I wrote a column in the Downtown Idea Exchange on this subject. My argument then was that these firms are part of a “pamper niche” that are not only found in abundance in some of the world’s most famed downtowns, e.g., Beverly Hills, Midtown Manhattan, Paris, etc., but also in many smaller districts where they bring in a lot of women with demonstrated disposable income, who also like to lunch and shop. Downtown retail merchants are crazy if they do not develop cross-marketing programs with the operators of pamper niche shops.

I also argued back then, that because they did not have significant investments in stocking merchandise, pamper niche operators could afford to pay higher rents than retailers. That is why they often supplant retailers in many storefronts.

Today, my arguments all appear to be holding true, but due to the Great Recession, pamper niche operators are taking over even more storefronts as they are vacated by weakened retailers. In some districts, pamper niche shops account for most new commercial rentals.

Downtown leaders who attack pamper niche shops are really off base. Instead of criticizing them, these “leaders” should recognize the customer traffic they generate and help their retailers create cross-marketing programs with them.

Reality Check 6 – The multifunctional character of downtowns and the traffic it generates supposedly means that downtown retailers need less power as a destination to be successful. The downtown, in a sense, generates a lot of traffic for them. But, far too often, the ability of downtown retailers to benefit from their district’s multifunctionality breaks down because of two factors: a) the downtown is too dispersed, so office workers, hotel guests and students are too far away to walk to district retailers, and b) the ability of retailers to captures sales from various “captured” daytime markets is inhibited by operational factors such as:

Companies trying to keep their employees in the building by providing cafeterias and subsidized meals
Retailers are closing their doors when hotel convention guests are ready to browse and window shop
Commuting students needing to quickly return to jobs, children, etc.
Although solutions are available, too many downtown organizations have given up on overcoming the dispersion and operational problems, giving up, in effect, on helping their retailers tap critical close-in market segments.

Here are some other “Naked Downtown Emperors” that I do not have enough space here to detail:

Attracting tenant prospects is the biggest challenge in retail recruitment – it’s more often a lack of appropriate locations with appropriate spaces
Increasing capacity will solve parking problems – easily finding existing spaces is usually the real problem
High crime rates hurt downtowns – crime rates are often comparatively low, it is the fear of crime that does the damage
Nobody will use the upper levels of a parking garage – they will if the garages are properly designed, e.g. see the garage at The Grove in L.A.
Are there others you would add to this list? Please let me know.