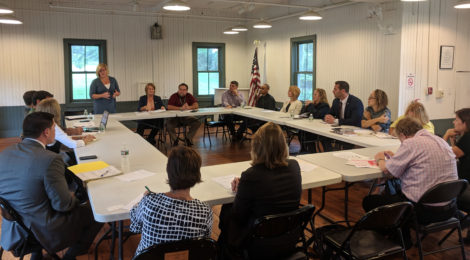 More than 20 downtown managers, economic development directors and public officials gathered at round table discussion in Fanwood on September 12th to exchange ideas about hot topics in downtown economic development. Members of Downtown New Jersey were invited to join this quarterly meeting of Union County professionals and officials in what it hopes to be the first in a recurring series of “lunch & learn” round table exchanges.

The afternoon began with welcoming remarks from Fanwood Mayor, Colleen Mahr. “Development takes vision, patience and commitment to design projects that reflect the town’s character and fit easily into the downtown landscape,” said Mayor Mahr, who emphasized the importance of keeping the residents and business owners informed of plans from inception to completion.

Participants then introduced themselves and shared some recent success stories. From launching new branding and messaging campaigns, coordinating streetscape improvements, facilitating redevelopment negotiations, and organizing creative events – NJ’s downtown managers are busy people! The exchange allowed participants to hear about innovative ideas that could be useful in their own communities, as well as exchange ideas to navigate common (and uncommon) problems that arise in managing a downtown.

After the initial exchange, South Orange Village Center Alliance Executive Director and Downtown New Jersey Vice-President, Bob Zuckerman led a discussion about updating municipal ordinances to meet the evolving needs of modern businesses. Mr. Zuckerman explained that South Orange had lost several viable businesses because their ordinances were 30+ years old and did not accommodate many of the “experienced-based” uses so popular today. Accordingly, South Orange embarked on a three-year voyage to “scrub the code”, looking at both permitted use and design elements. More detail about South Orange’s process and results can be found in the recent article written by Mr. Zuckerman for the DNJ Quarterly Newsletter – Municipal Ordinances: Is Your Town Open for Business? . The discussion that followed Mr. Zuckerman’s presentation demonstrated that many municipalities are struggling with this issue. It also demonstrated that “one size does not fit all”, but at the same time gave participants an opportunity to talk through strategies that may work in their own communities.

The following is a brief synopsis of the considerations the round table participants thought were relevant in reviewing ordinances for business compatibility.

Ultimately, the decision is best made by the community – what works in one place might not be ideal for another.

Overall, the round table was incredibly informative and great forum for sharing ideas and experiences. If you are interested in hosting a future round table, please contact DNJ Executive Director, Courtenay Mercer, at info(at)downtownnj.com or (201) 472-0356.