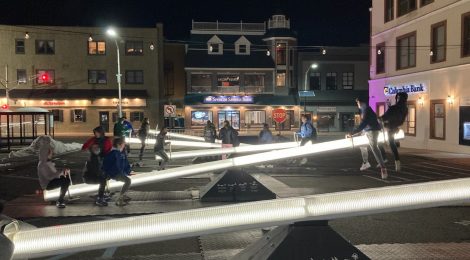 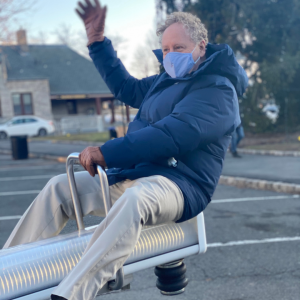 In late 2020, the Downtown Westfield Corporation was able to procure a significant COVID-relief grant from Main Street New Jersey (MSNJ). We considered ourselves fortunate because this money would assist many of the businesses in our special improvement district. The question we asked ourselves, however, was how we could get the biggest bang for our buck to help as many businesses as possible. We had already made the decision not to re-grant the money to merchants, because we didn’t have enough funds to really make an impact towards their bottom lines. So, what would be the best move for us? 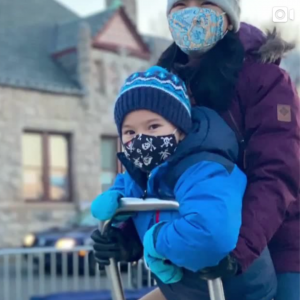 It turns out the inspiration would come from a Downtown New Jersey webinar. Yes, Downtown New Jersey to the rescue! At a placemaking webinar held in 2020, the Chair of our Promotions Committee, Erin Ben-Hayon, learned about a Montreal-based company named Creos who was bringing innovative art installations to major cities all over the world. I checked out their website and was delighted to discover that Creos was the company behind the very cool, interactive and illuminated seesaws I had seen in Manhattan. What a great attraction for Westfield! However, bringing these seesaws or another equally innovative art installation to a town like Westfield seemed completely out of reach due to cost and other logistical considerations. 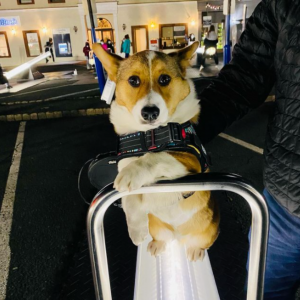 But, after receiving the MSNJ grant, the idea didn’t seem so far-fetched anymore. And, with the pandemic negatively impacting its business model, Creos was willing to seriously negotiate. What we initially thought would cost $50,000 or more, wound up setting us back roughly half that amount. Our board met and we concluded that, even though this would amount to a sizable portion of our grant money, bringing these seesaws to Westfield was worth the risk. Why? Because we all believed that having such a unique family-friendly attraction in Westfield, especially in March after everyone had been cooped up inside for so many months, would bring people to our downtown; and once there, they would discover some of our great restaurants, stores, and service businesses.

We were right! We entered into a contract with Creos in December to bring the seesaws to downtown Westfield for 16 days from March 5 to 21, which included three full weekends, and immediately went to work on planning the promotions for this event. We decided to call the event Glo Downtown (a play on Go Downtown) and planned some special events around the seesaws that would engage many of our merchants. 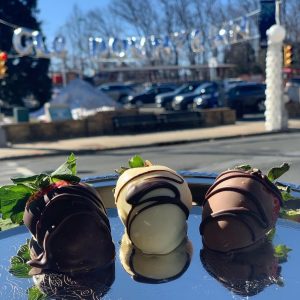 First, we secured two great sponsors—Wonder, a new food delivery and home dining service, and Columbia Bank, which has a branch adjacent to the seesaws. These sponsors helped us pay for all the extra frills we brought to our downtown, such as special lighting, balloon signage, glow sticks for kids, and additional security from Commercial District Services every evening. We also created a self-guided Chocolate Tour with some of our merchants offering chocolate-related items. One of our restaurants, Roosterspin, even offered its deep-fried Korean corn dogs dipped in chocolate. And, guess what? They sold out! We also hired a bagpipe player on St. Patrick’s Day. Additionally, all our retail merchants were offered the opportunity to run their own promotions during Glo Downtown, and many did just that.

In the end, Glo Downtown was a tremendous success. How do we know that? Well, we surveyed our merchants afterward and that’s what they told us. Seventy-two percent of our survey respondents said that they saw an increase in foot traffic or sales during the seesaw exhibition. Ninety-two percent said that Glo Downtown positively impacted the public perception of downtown Westfield. Seventy-six percent told us that our promotions (such as the Chocolate Tour) helped their business—and were more successful than they expected. So, as they say, the proof is in the pudding. 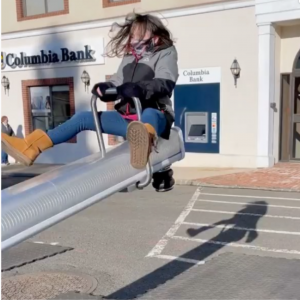 As you’re reading this, you may be wondering if your organization needs to spend thousands of dollars to bring this type of attraction to your downtown, and the answer is categorically NO. While it was certainly helpful to have a unique installation like the seesaws as an anchor, your downtown can accomplish some of the same goals with a much smaller budget and some real creativity. In fact, it is highly unlikely that we would ever have a similar amount of dollars available in the future for this type of event, so we’ll be brainstorming how we can replicate the excitement of the seesaws without the large expense. But for sixteen days in March, kids reached for the sky, adults became kids again, and our downtown was transformed into a magical wonderland.

The Downtown Westfield Corporation (DWC) is the management entity of the Special Improvement District. Began as Main Street Westfield in 1993, the organization is run by a staff of three, a volunteer board of directors, and various committees. Westfield is a nationally designated Main Street Community. Check us out on the web at westfieldtoday.com, or follow us on Facebook, Twitter, Instagram, YouTube, or Pinterest.

← Don’t Go it Alone! The Importance of Partners in Brownfields Redevelopment
Verona Plays to its Strengths →