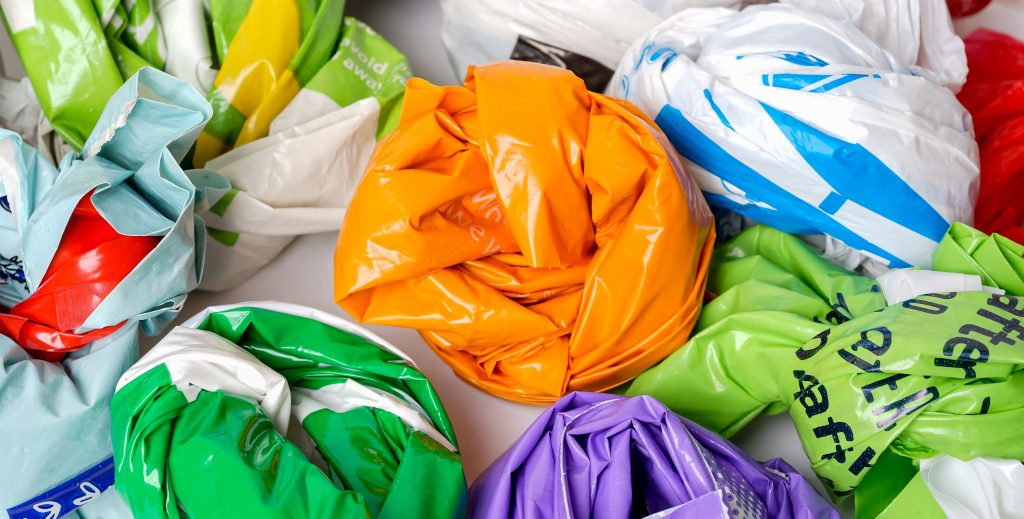 What do California, Connecticut, Hawaii, New York and the District of Columbia have in common? They have banned single use plastic bags. While New Jersey was on the verge of leading the ban against plastic bags in Spring of 2018, the bill was vetoed by Governor Murphy because it was not strict enough.

Why ban single use plastic bags?
Plastic bags break down into smaller pieces of plastic known as microplastics. When plastic bags break down into micro-particles, the tiny pieces can be mistaken for food and is ingested by sea life. Microplastics can release toxic chemicals into our food and water systems and can be harmful to human and animal health. Americans use approximately 100 billion plastic bags a year, with the majority of them ending up in landfills. According to Waste Management, approximately only 1% of bags get returned for recycling each year.

Why ban polystyrene?
It remains on this earth forever as a piece of toxic trash to humans, to wildlife and marine life, food supply, and our environment while costing taxpayers millions in clean up and mitigation costs. While Expanded Polystyrene (EPS), or Styrofoam, is technically “recyclable” there is, to date, no meaningful recycling of EPS due to high food contamination rates and a very weak market to clean, handle and process the material.

Why plastic straws?
Americans use millions of plastic straws a day. Those straws litter our streets, lands, shorelines, and oceans. Plastic drinking straws are among the top 10 contributors to marine debris pollution. They do not biodegrade but break down into smaller microplastics that have made their way into our food chain and the deepest trenches of our oceans. Even though many disposable straws are made from recyclable materials, they can be difficult to recycle. According to the Strawless Ocean, in the US, plastic straws are too lightweight for recycling sorters and drop through sorting screens and end up in landfills.

While there have been numerous bills floated, New Jersey has not moved forward on a statewide ban, which has resulted in many municipalities acting on their own to reduce the use of plastic bags that end up in our landfills, oceans and landscape. According to the Association of New Jersey Environmental Commissions (ANJEC), as of the writing of this article, there are thirty-seven towns that have adopted a plastic bag ban ordinance and five more towns are considering action. Some, but fewer, towns have or are considering also banning polystyrene items for packaging food and drinks and plastic straws.

Each town’s ordinance is different in what they are banning, fees they are charging, and fines that will be issued to those who do not comply.  Here lies the difficulty for both small mom & pop businesses – especially for the business that have multiple locations.

In most ordinances, single use plastic bags are banned completely, but some municipalities are allowing them as long as stores provide recycling bins. The thin plastic bags used for produce and items that leak are allowed due to health department requirements. Many towns allow fees to be charged for providing paper bags to offset the costs, and/or allow a charge to purchase a single use plastic bag. Paper bags in some towns must be made from recycled materials and be able to be recycled. The differences from town to town can be a nightmare for stores having more than one location.

Why is this an important issue for Downtown New Jersey? When ordinances are being enacted town-by-town, it can put our businesses at a disadvantage. It is important as downtown advocates that we get involved in this issue by developing a consensus with our businesses and residents to develop a plan of action that will help our environment with the least impact to our businesses. Special/Business Improvement Districts, Economic Development Corporations, and Chambers of Commerce will need to help in this effort. A marketing plan that will educate both the business owners and the consumers is necessary.

In a letter to New Jersey Mayors, Linda Doherty, President of the New Jersey Food Council said that “The New Jersey Food Council and like-minded partners are supporting a statewide legislative initiative to phase out the use of both plastic and paper disposable bags throughout New Jersey and further encourage reusable bags as a beneficial alternative. Various municipalities throughout New Jersey have enacted competing disposable bag bans and fees with different requirements, definitions, and effective dates. This has created an onerous and unworkable patchwork of local ordinances for retailers who have established businesses in your community and throughout the state. It also causes confusion amongst customers who shop retailers in different towns.”

ANJEC Executive Director, Jennifer Coffey, followed this communication with their own letter to New Jersey Mayors stating, “While ANJEC supports the statewide legislation, at the same time we support local action. The two are not mutually exclusive. There is no time to waste in reducing our plastic and polystyrene usage, and these regulations are what push the state to act. Lawmakers are encouraged by municipalities protecting their natural resources and reducing litter.”

All sides agree that we need to commit to a future where we reduce the waste we create, and then reuse, recycle and possibly compost most of what we throw away. According to Environmental Protection Agency calculations, current production, consumption and disposal practices account for over 40% of U.S. greenhouse gas emissions. Eliminating plastic, which takes hundreds or thousands of years to decompose, keeps our communities cleaner for all to enjoy.

So how can you help with this process?  First write your state representatives to enact a state-wide ordinance to ban single use plastic bags, Styrofoam, and plastic straws.

Next, reach out to your Mayor and Council and ask to be involved, if not take the lead on this issue. As the downtown and business advocate, provide input on the development of any ordinance being considered and help develop a marketing plan that will educate both the business owners and the consumers. The goal is to get people to change their long-established habits and begin to “reuse and recycle”.

Make sure your ban doesn’t have loopholes. In several towns, large chain stores are freely offering thicker plastic bags that meet the definition of “reusable” because they down wear down/break as fast as traditional single use plastic bans.

Some ways you can advocate for business are:

This is an issue that affects all of us. As downtown advocates, let’s work together to lead the efforts to “Reduce & ReUse”. Working with our businesses will help make a difference for our children and grandchildren’s future!

Beth Lippman is owner of Administrative Resources, Inc. She has helped create and managed many SID’s/BID’s during the last 20 years. She served as the DNJ Executive Director from 2002 through 2011. She now manages the Livingston and Springfield BIDs, and is a consultant to towns looking to create a BID or helping to make their existing BID thrive. She can be contacted at 201-452-9035 or bklippman@gmail.com.