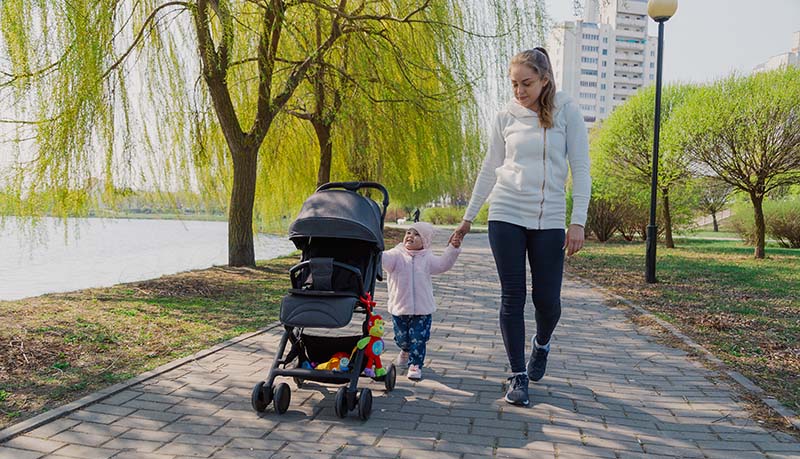 Beyond the Half-Mile Circle: Expanding First-Mile, Last-Mile Access to Transit

There is an undeniable power in recognizing that human beings evolved to walk. Walking is fundamental to our wellness and satisfaction as bipedal creatures; it is baked into human physiology and psychology in ways so profound that Stanford researchers claim, “…a person’s creative output [is] increased by an average of 60 percent when walking” [1].

Why then, when thinking about first-mile and last-mile travel, do we often assume the walking range of transit users is so small? First-mile, last-mile travel (FMLM), the beginning and final stretches of any transit journey, is overwhelmingly made by “active transportation modes (walking/biking/wheelchair/etc.)” [2] and is frequently set as a half a mile for pedestrians.

When thinking about walking first and last miles, we need to prioritize better walks rather than shorter walks. The standard of half-miles as the appropriate limit for transit users to walk to stations does not reflect the influences of engaging factors and features: appealing storefronts, shade, foliage, inclines, perceptions of safety, levels of noise, sidewalk widths, public art, street furniture, and drainage, among a long list of other considerations. What makes for a “good” walk—an enriching, attractive walk—should be a greater concern for transit planners when tackling first-mile and last-mile travel.

In accepting the variable nature of what distance makes for a good walk to a train or bus station, the question of how to develop pedestrian-oriented spaces needs to be answered. What aspects make for inviting storefronts or any of the positive traits listed? How do we reduce noise or negative factors deterring pedestrians from walking?

In many ways, the clear answer is convenient transit-oriented development (TOD) that would make these walks more pleasant. We can make storefronts more appealing by not siting them behind alienating seas of parking lots. We can reduce noise from motor vehicle traffic by encouraging travelers to choose other travel modes, and thereby reduce the number of vehicles on the roads. Proper transit infrastructure provides pedestrians, cyclists, and riders of micromobility with more than additional points to transfer modes, and TOD increases the comfortable range of active mode travelers by minimizing the presence of personal automobiles.

Transit-friendly planning and design promote the comfortable range of pedestrians through placemaking. In a 2022 event hosted by NJTOD.org, Downtown NJ, and NJ TRANSIT’s Transit Friendly Planning program, Rethinking the Right-of-Way, David Lustberg illustrated a three-stage continuum between car-first, mobility-first, and place-first street planning. TOD not only shifts the emphasis from car-first design (or rather a built environment designed solely for the automobile) to a transit mobility-first paradigm, but also creates spaces that naturally encourage movement and invite exploration. In place-first streets, pedestrians are impelled along by multi-purpose “high performance” features such as plazas or even humble drainage rock paths that appeal aesthetically and culturally to residents. The human scale—the long discussed urbanist concept of “the design of physical elements to illicit the best response from human users” [3]—can be understood as dimensions that are not only physically easier to navigate but as something that can provide psychological comfort, making for better walks.

In general, humans can walk a “mile-plus” comfortably within half an hour. The average human walking speed is roughly three miles per hour [4], though for the later stages of life it trends towards two miles per hour [4], and “manual wheelchairs… can [also] easily maintain three mph” [5]. When we favor half-mile estimations of walking FMLM catchments, we are essentially working within a framework which assumes that active mobility for greater than 10-15 minutes is undesirable or burdensome. As we recognize, promote, and implement TOD design that naturally increases the durations that individuals are willing to walk—be it 20 minutes, 30 minutes, or longer in the right circumstances—the expanded range of travel becomes more of a reality for FMLMs trips.

The wider, actual range of pedestrians supported by infrastructure has implications for the effective range of TOD. For instance, the mixed land use and higher density buildings permitted by TOD can be supported with lower capital costs through these increases in walking range. In 2013, a Pedestrian and Bicycle Information Center article states the median cost for a mile of concrete sidewalk is $142,560 and for a mile of bike lane is $89,470 [6]. These figures are lower than the upfront costs of $500,000 per diesel bus (using costs from NJ TRANSIT’s current fleet as a baseline) or $749,000 per electric bus [7] as stated in a New Jersey Policy Perspective report, and likewise have significant lower operating costs. Obviously, these figures and modes are not directly comparable, but illustrate that when good, prolific TOD improves the walkshed of transit facilities and reduces the number of buses running peripheral routes, there are clear cost savings on the table. 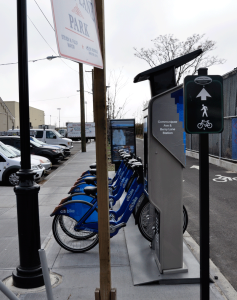 While active mobility is the principal mode that defines American FMLM travel, the growing application of electric micromobility solutions facilitates mile-plus jaunts to stations, too. Micromobility modes, such as electric bicycles, electric scooters, electric skateboards, and conventional bicycles, as personal or shared devices, increase the range of FMLM by allowing riders to travel distances more quickly. However, the limitations of personal and shared micromobility modes raise two critical transportation questions: What devices can make transit stations more available to otherwise non-riding travelers? What happens to those devices once a traveler leaves the station aboard a bus or train?

In planning for pedestrians, the answers are straightforward: Walking is nearly universal, and people do not need to park or carry their feet. In contrast, personally owned micromobility, such as an electrical skateboard, requires an upfront expenditure. Such a device may also need to be parked at the station, making it temporarily unusable and vulnerable, or carried (taking up space in the bus or train and imposing discomfort). Shared micromobility addresses these issues but requires greater public investment and foresight to implement.

Just as one might find that transit planners working in more walkable cities might expect larger walksheds around transit facilities than those working in sprawling suburbia, communities with a stronger culture of micromobility usage may experience a deeper effective pull by stations. Time-sensitive FMLM travelers may require their journeys to stations be under 15 minutes and a bike share allows them to satisfy their travel needs with an active mode. For personally owned bicycles, Montclair, NJ’s “bike depot” parking service near its Bay Street train station provides needed convenience with its safe, certain parking; after its successful launch in 2014, the project was lauded as, “…begin[ning a] culture of cycling by having this type of facility,” [8] and has been copied in Elizabeth, NJ and Bloomfield, NJ. Such flexibility is key to solidifying a mile-plus reality for FMLM travel, and deserves appropriate support to ensure micromobility can succeed.

The amenities gained from micromobility infrastructure also benefit pedestrians. Ken McLeod of the League of American Bicyclists points out that, “…bike lanes also reduce the distance pedestrians are in contact with motor vehicles while crossing the street,” [9] and other research cites a 20 percent decline in injuries across different modes after the introduction of bike lanes [9]. Infrastructure for better bicycle rides makes for better walks. Similarly, high quality pedestrian infrastructure makes it easier and safer to dismount micromobility modes. These transit friendly design elements positively affect the range of FMLM travel and help to create more satisfying spaces for all users.

Ultimately, those concerned with transit-friendly planning would benefit from looking beyond the direct orbits of transit facilities and consider improvements within these mile-plus walksheds. A core limitation affecting the ability to live more transit-oriented lives is not just the number of routes or stations available, but the access that riders have by walking, cycling, or rolling to/from existing TOD projects. Giving more attention to the built environment somewhat away from stations and stops through more robust bicycle and pedestrian infrastructure could allow for more TOD housing and other uses to be built. Recognizing that this housing can be supported through these types of active FMLM approaches would allow for more people to live car-free or car-light lifestyles more easily at a variety of price points.

Moreover, expanding what is within the walkshed could help to physically equalize some of the density that transit-oriented redevelopment can bring to given stations. Frequently, rezoning or variances are needed for TOD projects to enable higher densities and bring as many residents as possible within the half-mile of a station—a lengthy, and often fraught, process. With improved walksheds and enjoyable active travel, however, it becomes possible for planners and developers to argue for five-story units within a mile rather than fighting for ten-story projects within a half-mile, for example. This approach can also help support missing middle housing development—a wide range of housing types that span the range between single-family houses to mid- or high-rise structures—in places that are close, but not directly near transit facilities [10].

These implications regarding how the range of TOD can be flexibly and effectively expanded through better walking and biking FMLM travel are extensions of how TOD fundamentally works: marrying transit and the surrounding built environment. By increasing the scope of transit-friendly planning to better integrate longer stretches of active transportation, a wider geographic reach of residents will have comfortable access to a TOD’s transit networks. With appropriate human-scale features and investments, TOD projects do not have to be narrow, towering complexes, and instead their benefits and positive spillover effects can be more widely enjoyed from a mile-plus onward.

Published since 2005, the Transit Friendly Planning Newsletter is designed to keep municipal officials, planners, and advocates up-to-date on the potential for development and redevelopment around transit stations. This partnership between NJ TRANSIT and the Bloustein School’s Alan M. Voorhees Transportation Center (VTC) at Rutgers University aims to enrich the transit-oriented development (TOD) conversation in New Jersey’s diverse communities by highlighting what is happening in the state and around the country: best practices, model programs, legislation, and local problem-solving experiences.