As downtowns continue to adapt to changing regulations and consumer preferences during the COVID-19 pandemic, farmers markets present particular challenges. Typically crowded and bustling, community leaders are now tasked with organizing markets that are safe for shoppers while still providing fresh food options for people who need it most. Rachel Sieg, the Executive Director for the Historic Downtown Special Improvement District (HDSID) in Jersey City, and Rebecca Hersh, Executive Director for Main Streets Highland Park, share their experience opening farmers markets in their respective downtowns. 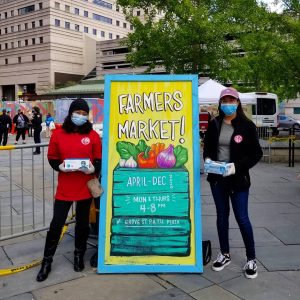 The Historic Downtown SID (HDSID) Farmers Market is hosted on a pedestrian plaza that, under normal circumstances, sees upwards of 15,000 people per day coming off the nearby PATH train. Typically, the market has thirty vendors, many visitors, pets, and children. To continue hosting the market, the HDSID has limited contact between vendors and customers, enforced social distancing, banned animals from the market, encouraged cashless transactions, and more – all to keep shoppers safe while still making the market available to as many people as possible.

The market has decreased its number of vendors from thirty to ten, allowing the SID to limit some traffic and the number of people in the market at once. The market’s boundaries have expanded into the adjacent pedestrian mall and is now barricaded with a single entrance and exit, allowing staff and volunteers to control the flow of people in and out of the market. They have increased the number of staff and volunteers that are present at each market to help enforce and guide people. The market is set up to ensure that there are safe distances between customers. Attendees are encouraged to pre-order their produce; and, at their first market of the year on Monday May 11th, over 60 people ordered online. Within the market boundaries, staff organize people into two lines: one for those who have preordered their produce, and one for those that did not preorder. Shoppers were encouraged to take their time in the market and were strongly discouraged from reentering after leaving. The market was successful in many ways. The vendors seemed happy and busy, with a steady stream of customers. Vendors who did not previously have online platforms received support from HDSID to create platforms through Local Line, which then provided an easy place to advertise products that would be at the market and allow customers to preorder their produce. While online pre-ordering is encouraged, onsite purchases are allowed with cash or credit. The market also continued to partner with farms that accept WIC vouchers – at these new markets, customers who qualify for WIC vouchers use preloaded debit cards or tickets for specific amounts. In general, each vendor had more staff to accommodate the new system. Where they had two or three before, the larger vendors had as many as ten staff working.

The Main Street Highland Park Farmers Market had planned on hosting a strictly monitored farmers market that would limit shopper density and create set walking routes for customers. They changed plans, however, in response to requirements from local police and the County Emergency Management Department and transitioned into a drive-through only farmers market. The drive through route allows customers to enter and exit from a single check-in point to pick up pre-ordered groceries in a completely cashless system. Like the Jersey City market, most of their vendors did not have online ordering in place. Some were able to pivot on their own to add online sales. To help other vendors adjust Main Street Highland Park sponsored platforms for online sales through Local Line.

During the first weeks, the Main Street highland Park had six vendors. They plan to expand to have eight this coming week, and more in future weeks. Shoppers placed around 80 orders. While the market was strictly advertised as a drive-through market only, they still had some customers walk into the market to collect their orders, and they were not turned away.  Past markets used both food pantry vouchers and St Peter’s Hospital vouchers for those who qualified for them, allowing vulnerable people to have access to fresh food. Right now, Main Street Highland Park is considering taking phone orders themselves and having them drop the vouchers at their office.